Since their introduction on the West Coast in the 1990s, toy haulers have rapidly become a nationwide phenomenon, particularly among motorcycle enthusiasts. In a recent article article posted by Rex Gambill of Mid-State RV Center, Gambill describes the increased trend that has taken place: 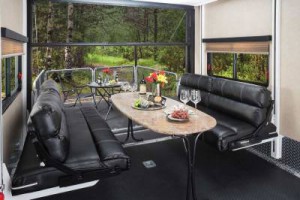 Early toy haulers were little more than cargo trailers fitted with a ramp door. They didn’t really take off until they included basic living quarters, and elements that appeal to the motorsports audience. Now, however, the product has evolved far beyond that to boast all the comforts and conveniences of modern recreational vehicles.

“When they first came out, they were all about diamond plate and racing flags, basically man caves on wheels,” says Darin Mai, a factory rep for Forest River’s XLR line of toy haulers. 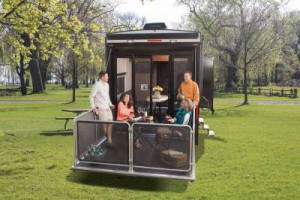 “We’ve been able to draw in what I call ‘action campers’ – folks who don’t just go somewhere and park their camper and look at the ocean,” he says. “These are people who want to take their ATVs, their motorcycles, their mountain bikes with them.

As a result, Mai says XLR has been able to attract RVers who previously owned traditional travel trailers and fifth wheels, but want the versatility of the toy hauler.  Even motorhome owners are finding out that towable toy haulers are a better fit for their lifestyle, 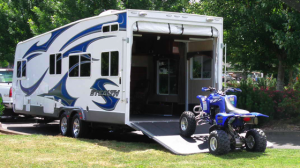 because rather than towing an enclosed trailer behind their motorhome, towing a toy hauler with a pickup truck gives them a “drive away” vehicle once they’re set up at the campsite.  Otherwise they’d have to raise jacks and unhook their motorhome to run into town for groceries or adult beverages.