Previous Image
Next Image
We Are Hiring! Apply Today »

Jesse Ruiz was born and raised in Calexico, California. He went to a school in Mexico from 1st - 6th grades. He then moved to Modesto and attended junior high and part of high school in Modesto; Mark Twain Junior High School, Modesto, California & Downey High School, Modesto, California. In his freshman year he transfered to Oakdale High and graduated in 1993. Jessie got married in 2003 to Marisela Ortiz and they have three kids; Jarett - 4 years old, Sofia - 2 years old, Damian - 5 months old. They also have a border collie named Morgan.

RV Sales, Yosemite Calif Jesse has been RV'ing all his life. In Mexico the RV'ing is a different than in California. He would love to share his camping stories with you. Jesse loves spending time with his family. Spending a day driving to the mountains or Yosemite is one of their favorite things to do together. Jesse also enjoys soccer. He can watch 20-50 matches a day and know just about every league in most major countries. But his favorite thing to do is watching his kids grow and spending time with them.

Jesse has been with Manteca Trailer & Camper, Inc., the largest and most efficient Northern California RV Dealership since 2003. Jesse has helped many families find the perfect New RV or Used RV, that fits into the families needs and budget. Prior to being in RV Sales, he has spent 17 years in the resturant business. There is nothing he would rather be selling than RVs. He claims he cant think of anything else that is family oriented and that is so much fun! He gets to sell fun. How good is that? 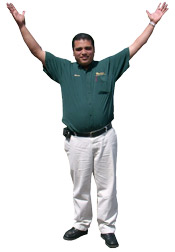